If you're anything like me, YouTube's algorithm has already pegged you as a raging homo and you can tell because you'll notice relevant content, such as LGBT+ music videos and scene compilations in the "recommended videos" section.

Well, as a result, I happened across this video and was introduced for the first time to Yoon Sol (Sol) and Seo Ji-Wan (Ji-Wan) (more fondly known, in their combined power, as Soljiwan) of Netflix's 'Nevertheless,', a Korean drama series.

They were adorable, but I had so many questions... I NEEDED MORE CONTEXT.

So, just in case there were any lazy mofos out there who didn't want to sit through the entire 10-episode series to understand what was going on with Soljiwan, I have taken it upon myself to watch* every episode and provide an illustrated summary below of their full relationship timeline. You're welcome.

Ahem, by "watch", I mean I fast-forwarded past any interaction that did not feature Soljiwan, and certainly all of the straight hookup scenes, so this is purely a Soljiwan relationship timeline.

We get to meet Sol in the first episode and her friend, Nabi (who, to be clear, is neither Sol nor Ji-Wan) when they both attend a meeting with their art professor.

As it turns out, Sol is a smart and talented art student who has the opportunity to participate in a competitive global exchange program. Nabi, on the other hand, has more hurdles to clear and envies Sol for having the option to study at any elite international university. However, Sol seems lukewarm to the idea of going abroad.

We get a suggestion as to why because, what appears to be a live action anime girl (who we learn is Ji-Wan) bursts into the hallway after Sol and Nabi leave the professor's office and tackles Sol in an affectionate hug (completely ignoring Nabi, who, again, is not Sol). It becomes clear that Sol is hiding the fact that she is considering an exchange program from Ji-Wan, her best friend, and the two of them split from Nabi.

Soljiwan casually strolls around campus arm-in-arm and Ji-Wan reveals that she has a blind date with a guy later that day. As a result, Ji-Wan needs to bail on a social commitment they made together with another group of friends, so Sol needs to go to the gathering without her. In perfect straight-best-friend-crush fashion, Ji-Wan tells Sol that if her blind date goes well, she'll set Sol up with someone too. Lesbians within a 1-mile radius can hear Sol's heart break a little, but she says there's no need to do that and they continue walking together.

Later, Sol attends the social gathering on her own, which seems to be a gossiping session at a cafe. She clearly feels out of place and copes by focusing all of her sensory faculties on her phone, including her peripheral vision.

This causes her to crash headfirst into a random guy, drenching him in coffee, after she volunteers to go up to get the group's drink orders while staring at her phone.

Sol feels terrible and exchanges contact info with the guy (who's name is Jung Ju-Hyeok but I'm going to refer to him as the "Coffee Dude" going forward) so that she can pay him back for ruining his clothes.

The following day in art class, we see that Sol is posing as a model for Ji-Wan who is drawing a portrait of her. Suddenly, in a trance-like state, Ji-Wan notices that Sol is actually quite the hottie and starts commenting on how beautiful she is, going so far as to stroke Sol's eyebrow... *fans self*. 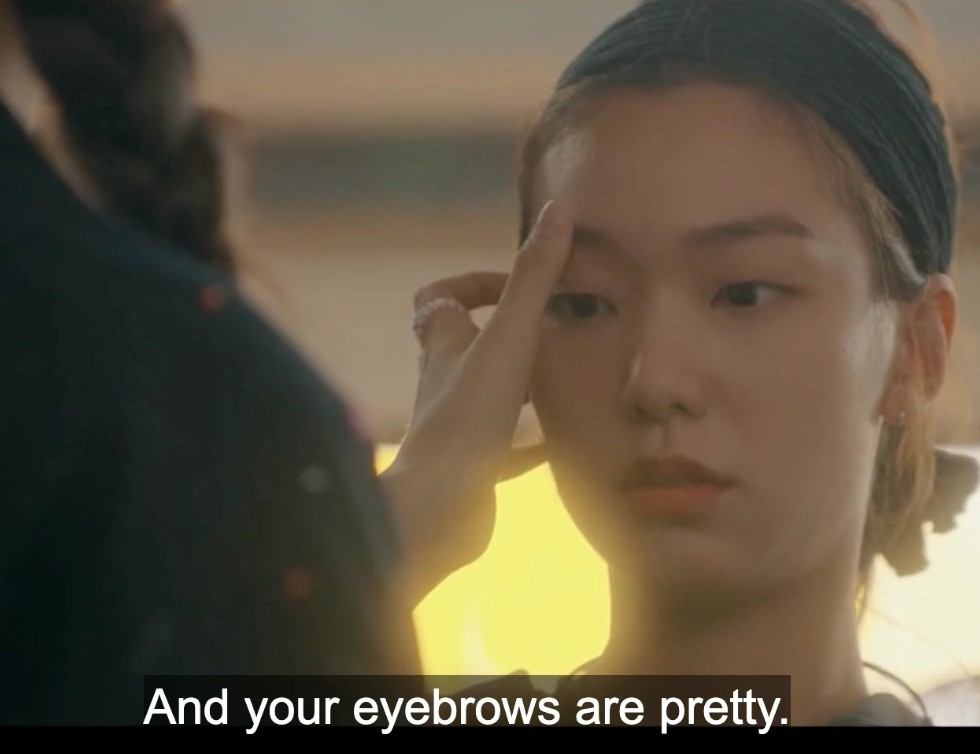 Perhaps in a rare moment of self awareness, Ji-Wan draws back and switches the subject multiple times and Sol then asks her how her blind date went. Ji-Wan says it went well and she plans to meet with the guy again to see a movie since then have similar taste in films. Sol responds, "that's great" in the most unconvincing manner.

Meanwhile, some other friends of Soljiwan are fooling around on the roof and one guy, Se-Hun (he has glasses, so I'm going to refer to him as "Glasses Dude" moving forward), reveals to the group that he has a crush on Sol. Almost as though she's summoned at the mention of her best friend, Ji-Wan joins the band of procrastinators and Glasses Dude begs her to help him get closer to Sol. Ji-Wan reluctantly agrees.

Later in the day, Ji-Wan finds Sol at the lockers and asks if Sol wants to hang out and drink with everyone, including Glasses Dude. Sol agrees and Ji-Wan is taken aback, dropping her precious bag of candy (likely gifted to her by Sol) that she seems to carry everywhere. Rightfully confused, Sol's like, "uhhh, didn't you just invite me to go?" and some of the color returns to Ji-Wan's face because she realizes that Sol isn't aware that Glasses Dude is behind the request. Ji-Wan, being the most subtle person in the entire series, maybe even in the world, then asks Sol what she thinks of Glasses Dude. Sol, none the wiser, says that he seems like a funny guy. This is enough to make Ji-Wan demonstrably crestfallen and she even rejects the bag of candy after Sol picks it up for her.

The night of the group hangout finally arrives and everyone's there, Soljiwan, Glasses Dude, Nabi... as well as other peripheral characters, and they decide to play spin the bottle. Sure enough, one fateful spin lands on Sol and another spin points right down the middle, between Glasses Dude and Ji-Wan. This is probably the happiest moment that Glasses Dude has on the show as he cheers, "IT'S ME!!!" but Ji-Wan ruthlessly shoves him out of the way like, "nah, it's me," and advances with a kissy face toward Sol. Sol visibly has gay panic and takes a swig of her drink before Ji-Wan gets any closer. Ji-Wan pouts at the rejection and Sol, perhaps sensing an impending heart attack, hurriedly excuses herself from the group to get a smoke, leaving her phone behind. While Sol is out, Ji-Wan notices on Sol's phone that an unfamiliar name, Coffee Dude, is calling her.

After Sol returns, Ji-Wan asks her who Coffee Dude is and Sol cryptically says that he's just someone she knows. Playfully, Ji-Wan says that she thought she knew everyone Sol knows. Seemingly in an effort to stake her territory, Sol says she doesn't, but then tenderly wraps a perplexed Ji-Wan in her jacket, cautioning her that it's cold outside.

The hangout ends up becoming a giant slumber party and Soljiwan has a cute scene where they're snuggled in bed together. 💕

Everyone's lives resume and Coffee Dude decides to take up Sol on her offer to treat him to lunch for accidentally spilling coffee on him. She ends up taking him to a restaurant that she's been to before with Ji-Wan and treats the meeting like a transaction, presenting him an envelope of cash for the estimated cost of his ruined clothes. He rejects the offer and pays for their meal, perplexing Sol, who doesn't pick up on his flirting and still thinks this is some sort of inefficient repayment program.

Coincidentally, Ji-Wan is having her follow-up blind date nearby and spots Sol and Coffee Dude chatting outside of the restaurant. Ji-Wan's blind date asks if she wants to go greet Sol and Ji-Wan decides against it, suddenly feeling distant from her best friend.

Back at school, Ji-Wan inadvertently learns from their professor's assistants that Sol has been offered a full scholarship for a student exchange program. What's more is that it seems like everyone, including their friends, knew about this before her.

Ji-Wan confronts Nabi about this and also reveals to her that Ji-Wan only pursued art because of Sol and worked hard to be able to attend the same school together (*cough* stalker *cough*). Ji-Wan then wistfully notes that she's jealous of how talented Sol is, who wanted to major in art since middle school, and that Ji-Wan, on the other hand, is struggling to keep up and may be in danger of graduating. In the smoothest transition, Ji-Wan and Nabi then decide to go to the flea market together.

At the flea market, Ji-Wan spots and unites at a table with the same gossip-y group of girls at the cafe where Sol had head-butted Coffee Dude. Knowing that Ji-Wan is best friends with Sol, they ask her about how things are progressing between Sol and Coffee Dude. Ji-Wan becomes noticeably defensive about the topic and, the gossip girls proceed to note that Coffee Dude is out of luck because Sol will be going abroad for the exchange program anyway. Ji-Wan partially deflates as she then realizes these bitches ALSO knew about exchange program and they probably knew before her too. The universe just can't give Ji-Wan a break and, at that very moment, Sol arrives with Coffee Dude.

Several of the gossip girls immediately descend on them and drag Sol and Coffee Dude to a carnival game that their mutual friends, including Glasses Dude, are running nearby. The game involves trying to pop a balloon as fast as possible between their bodies, requiring Sol and Coffee Dude to hug each other tightly. While this is happening, Ji-Wan and a leftover gossip girl are left at the table observing and Ji-Wan actually tells her to move over so Ji-Wan can get a better view of what's happening between Sol and Coffee Dude. The leftover gossip girl absentmindedly comments to Ji-Wan that Glasses Dude is handsome and wistfully notes that Sol is finally getting good luck with guys because she's been single for a long time. At this point, you wonder if Ji-Wan's gossipy friends are purposely trying to torture her because she has the poker face of a 3 year old and is clearly aggrieved.

In the meantime, Sol and Coffee Dude win the carnival game challenge and Sol gets to choose from a pile of stuffed animals as a prize. Sol picks what she knows to be Ji-Wan's favorite character and brings it to her. A sulking Ji-Wan says she doesn't want it and then demands to know why Sol brought a guy with her when she and Ji-Wan were supposed to hang out together. This is happening in front of all of the gossip girls and Coffee Dude, so the awkwardness starts settling over everyone like a weighted blanket on a hot day and Ji-Wan abruptly leaves the group to get a smoke, shoving the stuffed animal back in Sol's arms.

That's it for this post! ... I know, you're dying to know what happens next... was it all just a bad dream and Ji-Wan wakes up to find herself happily married to Sol? Will they be abducted by aliens? Is everything just a simulation?

Find out in Part 2, where I continue to ONLY recap the #soljiwan moments!